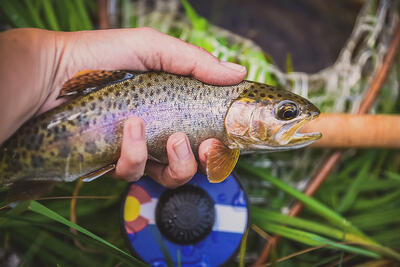 After an ample monsoon season in southern Colorado, reservoirs reach capacity, tailwater sections of the South Platte River triple, even quadruple in flow at times, leaving local anglers and guides at a bit of a loss with what now feels like unfamiliar water. As the Indian summer bridges us into fall, we are growing weary after long, mediocre days of fishing a river that we once knew better than ourselves, with few fish to show and sore fingers from the constant rotation of flies. We needed a change. 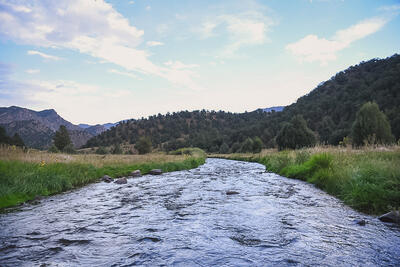 On a Sunday, we decided to head south. There’s a stream we know, pleated deep in the Wet Mountains. The water runs wild through sharp, red canyons, and access is available only to those who are brave enough to drive the steep, rocky, unkept road that descends down into the gulch. Lore of the territory proclaims the desolate canyon to have once been part of the Denver and Rio Grande railroad branch line, a hub for ranchers and miners dating back to 1881. Though the line was finished, it was short lived after flash floods swept the canyon leaving remnants of the railroad, abandoned mines, and dilapidated stone structures. 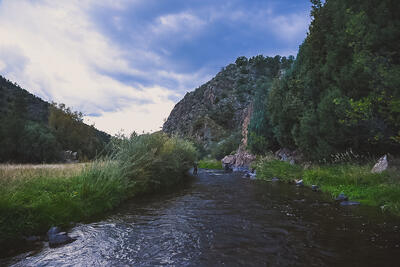 Prior to colonization, the Ute Indians roamed the canyon, the stream serving as their proximal path to the Wet Mountain Valley where buffalo and elk were plentiful. History echoes along the obtrusive rock walls, and sweeps the tall grass and wildflowers where the canyon opens to meadows. You won’t see other people here. Man’s attempt to pioneer and occupy the ravine was quickly terminated by nature’s forces. The land is now home to some of Colorado’s most dense populations of mountain lions, bears, rattlesnakes, deer, and elk.

After the white knuckled descent into the canyon, we parked our Tacoma and, together, released a long exhale. Soft gray clouds hugged the sky; unsure if they implied rain, we stuffed our rain jackets in with our fishing gear, as we rigged our lightweight rods. An eerie silence overcame the gulch. Every time I come here I have to adjust to feeling that I am most likely being watched by a mountain lion, and instead of letting my little dog, Ginger, roam like usual, she is leashed and at my side. We begin our hike down to the water, and the first thing I notice is a fresh, steaming pile of mountain lion scat on the trail. My hand cradles the bear spray attached to my wading belt. I’m not one who is keen on the idea of carrying or owning firearms, but I am relieved that Andy has brought his sidearm, just in case. I see the stream below and the excitement builds deep in my belly. It’s a nice creek, wider than you would imagine. 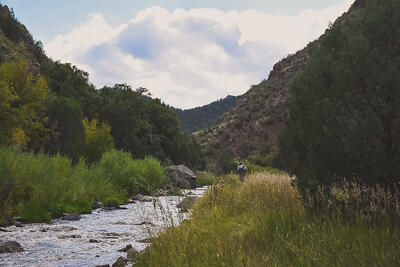 Today we have decided to fish upstream for the first time, instead of the usual downstream adventure. Because of the difficult access, we only come here about two to three times a year, and each time yields a different experience. The stream offers canyon walls with deep pools to nymph, open meadows with grass and wildflowers that frame fast running riffles, and slow, glassy, soft water in which to delicately place a small dry fly. Since it’s the end of summer, grasshoppers fling through the grass in dozens as we walk. Thus, I’ve chosen to fish with a hopper called Amy’s Ant. 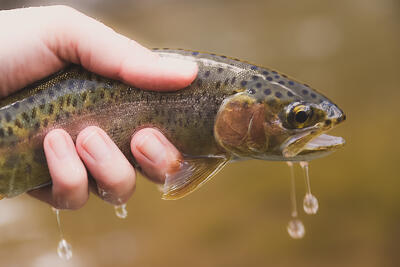 We wade across the creek and begin our journey upstream. After identifying a nice stretch of riffles, I throw my hopper into the riffle’s seams and on my third cast I’ve hooked a nice eight inch rainbow with stunning juvenile markings. Since I am more accustomed to fishing with my 5wt Hydrogen, I am somewhat caught off guard by the flexible fiberglass 3wt Butter Stick, but it doesn’t take long to figure out how to accommodate the action of the rod, and before I know it, I’ve landed a few more small rainbows. The unassuming gray clouds eventually unveil the sun, and we remove our layers and keep fishing upstream. Andy is giddy as he hooks trout after trout, and though there’s a little bit of competitiveness in us both, we take turns by offering each other the next approaching run. “I’m catching most of them in the faster moving water,” he says, “but it’s hard to see the hopper drift now that the sun is out. I’m missing half of them.” I agreed and suggested we stop for a stream-side lunch. While eating grapes, strawberries, artisan cheeses and crackers, the sun peeks through intermittently, warming our skin. A hearty blue winged olive hatch suddenly appears from the water’s surface and in the corner of our eyes we see tiny rises from the riffles. Still seated and eating, I’m too tempted by the hatch, and I cast my hopper out. I hook two brown trout. The second, no more than four inches, is the perfect embodiment of the stream: wild and free. 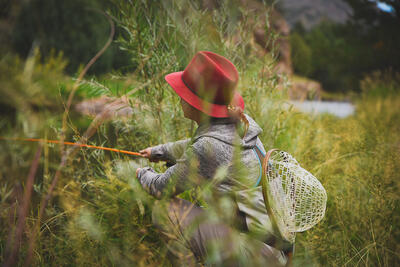 Lunch demolished, we reach more canyon walls as we move upstream, always staying within each other’s sight. I surrendered a run to Andy and decided to peek upstream. The metamorphic rock formations began to look more cavernous as I walked, and as my pace slowed, my excitement regressed back into the eerie feeling I had when we first arrived. I stopped and looked down at my feet to see a clean, white bone. I realized I was standing at the mouth of a mountain lion den, and without hesitation, I retreated back to Andy and Ginger. “It’s time to go,” I said, looking at my clock that read close to five pm. Andy had just tied on a nymph rig and started to pout. “We need to go now if we want to get out of this canyon before dark,” I alleged, after calculating the long trek we still needed to make to the truck, plus the treacherous drive out. Andy sighed, “Ok. As long as we can fish along the way back.” We fished downstream, but I couldn’t shake the ominous feeling that seemed to grow with the darkening of the clouds that hovered above the canyon. The clouds weren’t looking so innocent anymore. 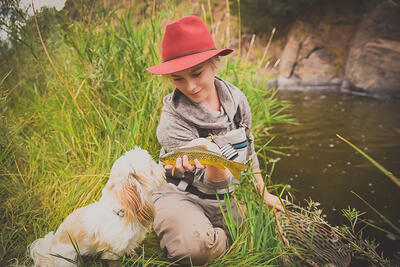 Our pace increased the closer we got to the truck, and in the distance, near to where I saw the initial pile of cat scat, I saw a man. He was standing on the ledge of the trail head, and he threw something down into the canyon. “There’s a man,” I said, which felt strange to say out loud because we hadn’t seen another human being all day. The man disappeared behind the canyon walls. We crossed the stream and approached the trail leading up to the truck. Andy motioned for me to stay behind him, his hand close to his sidearm. A Chevy Blazer was parked next to our truck and the man appeared suddenly from behind it. We were relieved to see he hadn’t broken into our vehicle, but were caught off guard by the man’s jarring movements as he approached us. The man was friendly, but in a dubious manner. His breath smelled of booze, and his face told a story of a merciless life, most likely tainted with substance abuse and hardship. He spoke non-stop, with endless nonsensical ramblings about fishing, and about his developmentally disabled cousin. It seemed his only good memories of his life were now ghosts here in this canyon.

Mix it up. The i.D. reel features a smooth rulon disc drag system and is built using sturdy die-cast aluminum construction. The flat frame allows for easy personalization, using one of the many different decal options offered on our website. 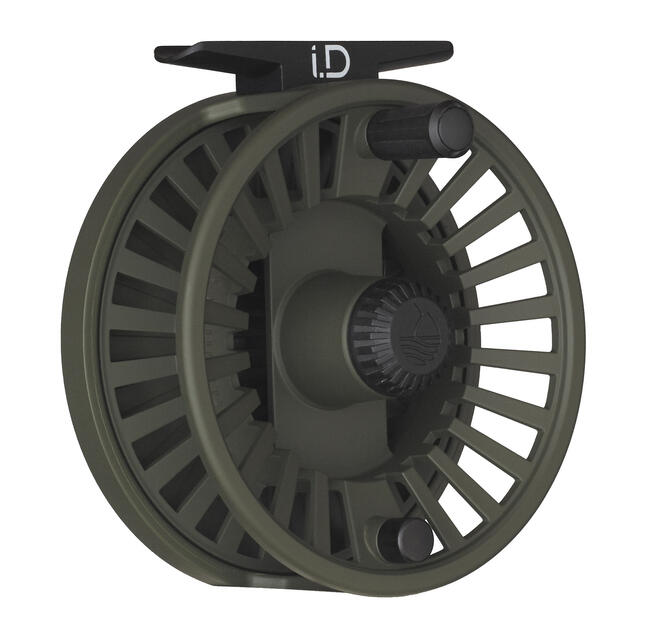 Feeling trapped by his chattering, we hastily broke down our rods, politely adding an occasional “uh huh,” or “sure”. Before I could even get my waders off, the sky finally released the rain that had been seized by the clouds all day. Sheets of rain poured down, and we piled into the truck. We looked at each other and laughed as the windows began to fog. “Good call on leaving when we did,” Andy said, almost admitting that he had been pouty to me about going. “Yeah, and that was an easy way out of an unwanted conversation too,” I laughed as I internally thanked the rain. 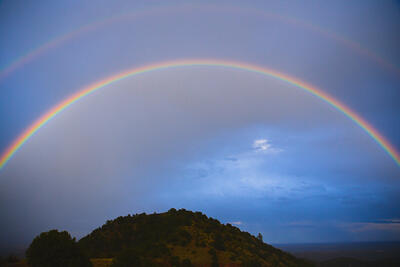 The man stayed close behind us in his Chevy all the rainy drive out of the canyon. “Do you want me to pull over so you can take your waders off?” Andy asked. Wanting to spare any more interactions with the man, I said, “Nope. I’m good. Just keep going.” The drive out always seems easier than the drive in, and before we knew it we made it to the smooth, gravel country road. As we descended on the slope of the eastern side of the mountain pass, we could clearly see the storm impending over the city below. The sky was a dark cobalt blue. We drove a little further down the pass and what appeared next had me squirming in my seat, and pleading with Andy to pull over. I grabbed my Nikon from the backseat and jumped out into the rain. There, was the most beautiful double rainbow I had ever seen in my life. After a day of fishing one of the most enchanted streams in Colorado, this was a perfect omen to close our day. Andy’s hand rested on my knee the long drive home, and with soft smiles and tired eyes, we saw the Wet Mountains in the rearview mirror, gently reminding us not to stay away so long. 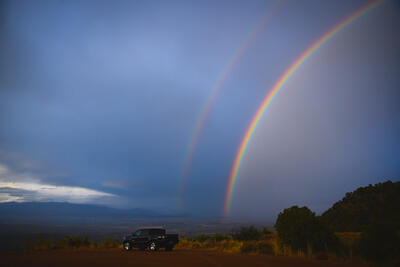