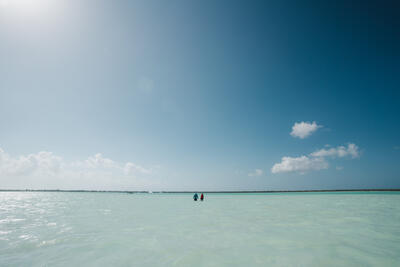 With the spread of the Covid-19 virus, the practice of social distancing has become the new norm for the time being. With the Redington office now closed, my current work situation has changed from catching up with co-workers over morning coffee, to removing my cat from the keyboard while trying to answer emails. In between emails and interruptions from my overly needy cat, I’ve found myself reflecting on a previous trip to Kiribati and how it would be a much better place to socially distance myself instead of my kitchen counter. Kiribati or Christmas Island as the fly fishing community refers to it, is a remote island located in the South Pacific, accessible by 3hr flight south of Hawaii. Which would be the perfect spot to ride out this outbreak, that is unless the virus found its way on to the island. To prevent this from happening, the overseeing government closed all travel to Christmas Island to help prevent the spread of Covid-19 to this remote part of the world. The fishing was good a few months before Covid-19 began infecting people, and I can only imagine how good it must be now with almost zero pressure on the fishery since the New Year.

About as remote as it gets right here. Photo by Clay Nowak

Getting to Christmas Island requires a night's layover in Honolulu because of the early departure time in the morning. The layover was much welcomed, due to the fact I live in Seattle and my legs could use a little beach time. After an afternoon on the beach and one too many Mai Tais, the group was excited to spend the next week fishing the flats. The trip didn't feel real until after we made our way through customs and watched the aircraft we came in on take-off, continuing on its way to its final destination. Christmas Island only has one flight per week, so at that point, we were committed to at least a week there for better or for worse. We loaded up into the back of a pickup on wooden bench seats and headed off to the Christmas Island Outfitters/Sunset Lodge which was arranged for us by our friends over at Fly Water Travel. After a quick introduction, we settled into our rooms and begun to rig our rods in preparation of the week of fishing that awaited us. Christmas Island has such a diverse fishery, you can easily find yourself wanting to fish a wide array of rods. Anything from a fiberglass rod, like the BUTTER STICK to a 16wt PREDATOR for bluewater fishing, and everything in-between. Most of the group settled on 7wts from bones and triggers, and a 11wts for GT's. The rods were Just the first part of the equation in our preparation, as we had also begun to organize the remainder of our gear, sitting on the beach as we watch the sunset in the horizon.

Standing out on one of the many pancakes flats. Photo by Clay Nowak

Tailing bonefish will get anyone excited.

On the first two days, we quickly realized that the amount of gear we brought was over the top, to say the least. From trying to fit every piece of fishing gear we brought with us to the Island, plus camera gear, rain gear, water, and snacks all in the day packs we strapped to our backs. I bet each of our packs weighed close to 20 pounds. By the last day of fishing, we became experts on what to bring on to any given flat and what to keep in the boat to prevent weighing us down. The fishing there was all done by foot which had its pros and cons when compared to fishing out of a skiff or panga. We couldn't cover as much water and didn't have the height advantage that commonly helps with spotting fish when fishing from a boat, but being out of the boat on foot allowed everyone the chance to fish as much as possible. We found this favorable to spending half your day watching someone else fish from the front of the boat like so many other saltwater destinations. Christmas Island Outfitters fished four to a boat with two guides per boat. Some flats were so small that they would only hold one angler while others like 9-mile flat were much larger, easily accommodating more than one boat full of anglers. Every angler who jumps out of the boat for the first time at Christmas Island will most likely be able to spot one of the many different types of triggerfish found there. These large orange or yellow looking fish are like floating pumpkins that could be spotted even by the most novice of saltwater anglers. Spotting them was easy, but hooking them and landing them was a completely different story. They're about as spooky as they come, they live in coral which will cuts leaders in half in an instant and their teeth will crush even the strongest of hooks. Many anglers give up on trying to catch them after about a dozen casts all result in them spooking off. As for bonefish, most anglers will struggle to spot them at first and spend most of their day mistakenly misidentifying every milkfish or pufferfish as one. When it comes to spotting GT's, you'll know the moment when one arrives on the flat. It's hard to mistake a large fish that is actively hunting as it moves across the flat, this combined with the excitement of the guide's voice, and you'll know its a GT.

The 790-4 CRUX is the perfect combination of power and control for stalking bonefish on one of the many flats at Christmas Island. The 7wt makes fishing for the average size bonefish at Christmas Island enjoyable but still had enough power to combat the wind.

Being practically on the equator, the sun is very intense at Christmas Island. Nicole so covered up from the sun, she looks like she is ready to rob the place. Photo by Clay Nowak

One of the guides directing the driver on to a flat.

The week's fishing was rememberable. The weather cooperated for us and almost every flat we stopped at had plenty of opportunities for hooking fish. The bonefish were plentiful, once you could see them and there were even some decent size ones roaming around. At least one GT was within casting range for one of us each day with even a few them showing interest in our flies. As for the triggerfish, by day three I completely was defeated and had given up on them. Nicole, on the other hand, was persitant. She was committed to landing a triggerfish and manage to hook them every day, but for one reason or another wasn't able to get them to hand. Until the last day, she found one to eat her fly. The fly held up during the fight, she was able to avoid the coral from cutting her leader, and after all that hard work she landed her triggerfish. John also put in the time of focusing on a specific species, and by mid-trip, he had his GT. The week was a success with plenty of fish to go around, and great moments shared between friends both on and off the water.

Not everyone in the group gave up on triggers. Nicole with a nice trigger. Photo by Clay Nowak

Releasing one of the many bonefish of the trip.

The 1190-4 PREDATOR will handle any GT found within the reef at CXI. The easy to load tip will help turn over the larger baitfish patterns and the extra power in the butt section allows you to extra pressure on the fish. Pair it up the GRANDE 9/10/11 and it really becomes an unfair fight.

There is a lot of great advice about fishing Christmas Island that anyone can find with a simple web search, but here are a few tips that I learned on my trip that you can't find on the web.

John with a nice GT.

The BUTTER STICK bent over on a bonefish. Photo by Clay Nowak

Bring tortillas to make breakfast burritos in the morning as lunches are really that bad.

Bring your favorite hot sauce, as this could help save a meal.

If you're really wanting to catch a GT just always have that rod in your hand and ready to go, otherwise you'll end up miss shots during the process of switching rods.

Bring a waterproof boat bag to keep the majority of your gear on the boat as you wade the flats with a smaller and lighter pack.

Dutyfree at the Honolulu airport, if you enjoy have a drink after a day of fishing. Rum or whiskey is your best option due to the lack of mixers.

If you have a spin rod, bring it for casting off the beach while at the lodge. We saw some massive GTs swim pass but even Lefty couldn't cast that far.

Bring flies that are heavier and smaller than you would expect for the bones. When the tide changes it will put so much water that a light fly will never get to the fish.

Bring an extra hat, stripping guards, pair of sunglasses, or anything else you must have while fishing. Most of these items are small, but they can't be replaced once your there.

The Christmas Island Special is obviously the goto fly for guides. Photo by Clay Nowak

Back at the Sunset Lodge we enjoyed a few pre-dinner drinks and reminisced on the day's adventure while relaxing on the beach watching the sunset. It was easy to forget about what the rest of the world was doing while at Christmas Island, but unfortunately, Christmas Island is not immune to the world and to change. This coming year Christmas Island will be welcoming cruise ships, which will give the locals a much-needed boost in their economy but at what cost to the fishery and to the local's traditional way of life? The other uncertainty Christmas Island faces is the effects of climate change. Warmer waters have greatly impacted the flats, only a fraction of the natural coral remains compared to a decade ago. The highest point on the island is only about ten feet above sea level, which means if the ocean rises any higher, Christmas Island could vanish forever.

John working the bank in the backcountry. Photo by Clay Nowak

I consider myself lucky to have been able to fish Christmas Island with a great group of friends before it's fishery will be affected by the foreseen changes. I know the current change of having to be confined to our homes to help prevent the spread of Covid-19 will pass, and life will return to normal. So during the next few weeks, I'll be imagining myself social distancing at some of my favorite destination fisheries and will try to sneak off to some of the local ones to wet a line.

I wanted to end with this photo of Clay taking a break from taking amazing photos to get some fishing in.