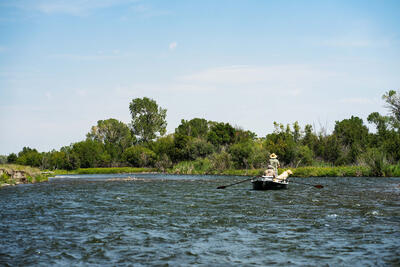 In a very unpredictable year, where it feels like normal was just tossed out the window, the warmer temperatures of July and August still came as they have every year prior. The heat of these months tends to slow down trout fishing across the West. It brings an end to the few remaining big bug hatches that are still happening and makes the predictable evening hatches less so predictable. Late summer does provide two new hatches that keep trout looking to the surface to feed. One such hatch calls for anglers with incredible eyesight who enjoy tying knots with 6x and 7x tippet to a hook size of 24 and smaller. This is the Trico hatch, It can be a challenge for anglers of all skill levels due to the small fly size and lighter tippet used to fool the trout that are keying in on these smaller bugs. If your eyesight is not up for the challenge, don't worry,. the second hatch that happens this time of year is not one born from the water. Terrestrials of all types emerge during these later months and some end up in the water, serving up a good size meal for a hungry trout.

Make sure you have plenty of your go-to patterns but don't be afraid to mixed things up and try something different.

When it comes to terrestrials that trout feed on, the grasshopper is king. Whether it's from a miscalculated jump or from being blown into the river, grasshoppers end up in the water one way or another. When they do, these larger insects will attract any hungry fish in the riffle. Unlike Trico flies, grasshopper patterns range from size 6-12 and are typically tied on to 2x or 3xleaders. This makes rigging hoppers much easier than tying on a size 24 Trico pattern. Another nice thing about the fly size is they float well and are easy to see on the water. Oh, and don't worry about a perfect, drag-free drift when fishing hoppers. Once these insects land in the water, they are unable to swim; resulting in a lot of movement and vibration as they drift with the current. So when you're fishing a hopper, give it a twitch now and then, to mimic a grasshopper's natural movement when It’s in the water.

When fishing hoppers, a 9' or 9'6" 6wt is the preferred rod of choice on larger Western rivers. These large air resistance patterns can be difficult to cast, especially in the wind. Remember, an ideal day to fish hoppers would be a hot summer day with some wind. Any floating line will work but something that has a heavy front taper will just make things a little easier on you. A shorter, heavier leader will also help turnover these larger patterns. A 2x or 3x leader that is 6'-7' long should get the job done. Remember, you don't have to fish hoppers with grace, just get them in the water. Hoppers come in all colors and sizes, so make sure you have a few options. A busy day on the river could have them looking for something slightly different than what every other angler is throwing at them. When in doubt, never underestimate the chubby. If you get desperate during a day of hopper fishing and the fish are not coming to the surface to eat what you’ve tied on, you can always add a dropper to your hopper to increase your odds. To add a dropper, simply tie 3 feet of tippet off the hook of the hopper. Then tie a bead head nymph to the end of the tippet, now your hopper is both a dry fly and indicator for the nymph below it. It works so well, it's kind of like cheating.

How to tie a hopper dropper rig

A nice rainbow that fell victim to one of our hoppers.

Hoppers are big and obvious to see on the water, which makes them easy to fish. Hoppers can also be hard to cast, especially when it's windy. The 690-4 CRUX and its High Line Speed Taper makes turning over a hopper easy, even when the wind is blowing upstream. Pair it up with a lightweight reel like the RISE, and you'll be hitting the bank over and over, nonstop without your arm needing a break mid float.

The locals giving us the evil eye for fishing their water.

Hopper fishing can be done both out of a boat or on foot. Mid-morning to early-afternoon is typically the best time to fish a hopper, but keep in mind water temperatures. If the water temperature goes above 66 degrees, you should stop fishing and turn to another summer activity or go beat up on warm water species like bass and carp. Warmer water carries less oxygen than colder water, causing trout to become more stressed and unable to recover after being hooked. Be aware of the water temps before heading out for a day of fishing during the later months of summer. Don't overthink hopper fishing, just fish your typical trout water like you normally would. As mentioned earlier, don't worry about a cast that lands your fly gently onto the water, just get the bug in the juice. Perfect drifts aren't always needed, and movement is ok, so twitch or skate your hopper to your heart's desire. To twitch a fly, strip in excess slack and lift your rod tip high. Once you removed the slack, wiggle your rod tip just enough to move the fly slightly. A little movement is good, but some people will overdo it just starting out. As for the skate, a slow smooth skate into the bank will entice more grabs than something ripping Mach 10 across the water. You want your hopper putting off a little wake behind it, so if you need to increase the speed, bring the tip to the bank and if you need to slow it down hold your tip over towards the center of the river. This skating or wake making movement can mimic a hopper skittering across the surface.

So next time the heat has you beat, grab your rod and handful of hoppers, as you head to the river to cool off. Just remember before you serve up that supersized fly to brownzilla, make sure to check the water temps.