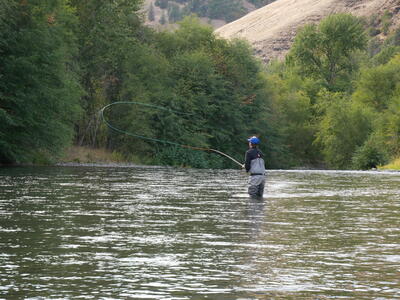 After a few trips to the Central Oregon area, I convinced myself to make the move westward and to start the next chapter in my life. At this point, the furthest I had ever lived from home was only a few hours drive. This move was about furthering my career as a cat diver and working for a bigger mountain, but in reality, I was justifying my move for the prospects of better skiing, fishing, and mountain biking.

Going to the film tours and reading fly fishing magazines, Spey casting and the pursuit of steelhead have always interested me. Growing up in North Carolina, I mostly followed the blue lines on a map chasing smaller trout or fishing ponds for bass. Upon my arrival in Bend, I decided to pick up a Spey rod to learn how to cast it. Fish start showing up in the Deschutes River starting August which at this point didn't give me much time to figure out the two-handed game. I spent all my free time on the water slowly working out how to cast and how to read steelhead water. After a week or two of flailing, some friends help me with my casting and showed me what to look for when swinging for steelhead.

Several weeks have passed without even a bump, let alone a trout grab. The mind tricks of swinging for steelhead started to set in and I have begun questions possible reason why I haven't had a grab let alone a fish to hand. Was I not casting far enough, wrong color fly, too much sun, or maybe the run I was in. I even went as far as in changing my routine at home before heading to the river. Late one day it finally happened. It was getting late in the day and I was already in the mindset of chalking up another zero. As I was swinging through a run that was known to hold fish, or as I was told so. I began questioning what I did wrong that day when all of a sudden, my line came tight and out of the water was steelhead that had taken my fly. It all happened so quickly, from the grab, to if flying out of the water, and finally releasing it back into the river. It was a small bright hatchery fish, sure it wasn't big or wild, but it was my first encounter with a steelhead. From that point on I have been hooked to pursuing steelhead on a swung fly.

Deschutes River will challenge the ability of any Spey angler. As the river is wide and the wind blows every day like clockwork, but the fish are grabby and will eat a surface fly or classic pattern making the 6126-4 CHROMER the go-to rod in pursuing steelhead here. This rod will throw Scandi style lines when the conditions permit the usage of these more delicate patters, but also has the backbone to toss a Skagit head with a sink tip during the colder months.

That encounter wasn't enough, I was already thinking about how I would go about finding another fish, but not just any fish, a wild one. I knew to land a wild fish had as much to do with skill as it did luck but landing a wild fish was the only way to top the feeling of my first steelhead. It took me the next couple weeks of fishless days before I would have my next encounter. I was in one of the more famous runs on the river when I had my second grab. This grab felt heavier, the line pulled off the reel faster, I knew this fish was bigger than my first. Once again before I knew it, the fight was over and my buddy had tailed the fish. This was it, I landed my first wild steelhead. I finally was able to capture one of these elusive creatures on a swung fly. After a quick photo, I released it back into the water.

I didn't make another cast that day. After retiring to the bank, I was fortunate enough to watch my buddy's line come tight and after a quick fight, he landed the second fish of the day. Not only was I able to land a wild fish, but watch my buddy hook and land another fish was truly special. The number of fishless days greatly outnumber days that result in just a grab, so to have two fish to hand was something special.

Landing both my first steelhead and my first wild steelhead are unforgettable experiences. I finished out the season with three more fish to hand. Swinging flies for steelhead may not be the most productive way in finding these creatures, but the days spend pursuing them and the time shared with good friends on the water makes it all more enjoyable and each fish that more unforgettable.