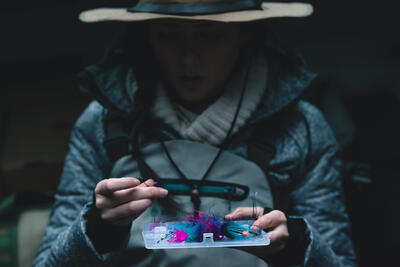 The truck is filled with the conversation of who is fishing what fly, then it slowly morphs into the theory of what fly actually works. I think to myself, it’s steelhead fishing, ”they don’t eat either way. " I let out a small chuckle to myself. When I think of steelhead fishing, many emotions come to my mind. Steelhead is an anadromous fish that initially were one of the most exciting things to me when I first moved to the PNW, from the Midwest. Four years later, and having experienced countless early mornings, the difficulty to get a run, having your pocket picked, constantly fluctuating coastal waters, and the decreasing fish numbers, the excitement has fizzled out a bit.

As the river appears through the mossy branches, the truck conversation shifted into the state of how sad steelhead returns of late have been. Kc makes the remark, “I’d like to catch one before the ever so slim chance I have is forever gone,” there’s a somber silence. We pulled up to the boat launch which was nothing more than a steep bank, which I thought was a joke at first. I stood on my tip toes to peek over the steep terrain to examine the “ramp.” At the bottom of the ramp, I noticed a boat that has just put in, at this point, I realize it is was not a joke. I attempt to backtrack the route the boat made down the ramp to the water. The nonexistence ramp seemed more like something you would see a redneck launch themselves off of while on a John Deer riding lawnmower. Andrew has begun tying the rope around the boat in places in which he thought he will be able to turn and control it while it was sent down the embankment. With the ropes tied to the boat, he slowly started to descend the boat off the trailer. Kc was manning the boat from behind it to prevent it from getting away. Maneuvering the boat down was to my surprise, a lot smoother than I had anticipated.

In search of chrome

The 7126-4 CHROMER is the perfect do all Steelhead rod. The 12' 6" length will deliver the line speed need to get the fly out on larger waters but is short enough to create a D-loop on tight coastal rivers during high water. Pair this rod up with a GRANDE 7/8/9 and any fish you encounter will be no match.

We got settled in and begun to make our way to the first run. Upon arrival, we spread ourselves throughout the long run with Kc at the top. The first boat of the day approaches him and we could tell the toxicity level quickly. They were loud and falling over as they casted their gear from the boat. The boat floated by KC and continued to fish their way through the run. To my astonishment, the boat back rowed through the run twice and then proceeded to anchor up and fish it. I remember staring in bewilderment, with my eyebrows moving closer together and wrinkling above my nose to mouth the words of, “what the f**k?” Out of frustration, we made our way back to the boat to get as far away from the only another boat we saw that entire day. By the third run and after about four casts into it, my mind began to wonder. I typically start with a song, which I sing to myself in my head, that then turns to me humming, to eventually me singing aloud. It’s never a song that I want to have stuck in my head, but I catch myself knowing every word regardless. After a few more casts, I attempted to learn new cast to help with my ADD as it begun to kicks in. This is my attempt on creating something new to focus on. I fish through the run and headed back to the boat. My feet felt like I am wearing two giant ice cubes, clumsy, heavy and had no feeling left.

Hours had passed, and we had only one coastal cutthroat caught by Andrew. Steelhead fishing to me is funny, your chances of hooking into one are slim, and landing them even slimmer (I have lost two fish I have hooked) yet there are so many people that still fish for them. I am not your “optimistic” steelhead angler. By that I mean, there are people that truly believe they will catch one, every time they go out. I, on the other hand, am convinced that I will not even be graced by the presence of one any time I go out. I have been fishing for them for four years now, and despite all this time I still find myself waking up early to pursue these elusive creatures. I genuinely enjoy swinging flies and solidarity of my thoughts as the river flowing, but don’t get me wrong, I still would love to catch at least one. We made it to the last good run until we hit the dead frog water before the take out. I didn’t fish the previous runs so Kc and Andrew insisted that I be the first one through. I made my way to the top and started a bit farther up than I normally would have. I begin to barely cast the head of my line out to fish the inside water first.

Slowly after each cast, I pull a few extra feet of line off my reel. My cast still fell short of the “juice” of the run, but all of a sudden I felt my line go taught and my swing came to a quick stop. “Shit,” I thought to myself, as I was sure that I was snagged up. I wait for a few movements and didn't do anything to my rod or line when all of a sudden to my disbelief, the line began to pull from my reel and my heart starts pounding. I let out some sort of noise that I am sure I have never made before in my life. By the time I can get those words out of my mouth, my line was screaming, and I began to scream. I was now faced with this fish running down the river. I have never felt something bend my Spey rod like this before. I attempted to keep my cool while trying to keep the fish in control by keeping my rod low and to the side to keep the opposite pressure on the fish. What felt like forever in the making was over in a flash. I saw a flash of bright chrome fish as it rolled on the surface of the water and in unison, we all let out a joyous holler. I looked to Andrew and ask if he had a net in his boat, he reluctantly said no (just goes to show you how confident we were at catching fish that day). Andrew slid his hand around the fish’s tail and had a firm grasp. I’ve done it, the stars had aligned for me that day and I’ve landed my first winter steelhead.

4-layer waterproof-breathable fabric and SonicWeld seams to create an ultra-functional wader with superior durability for continuous abuse on the river. 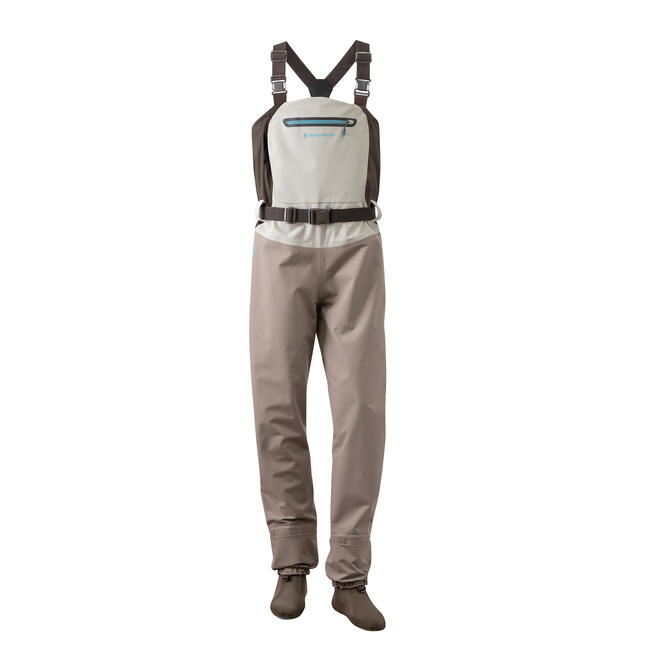