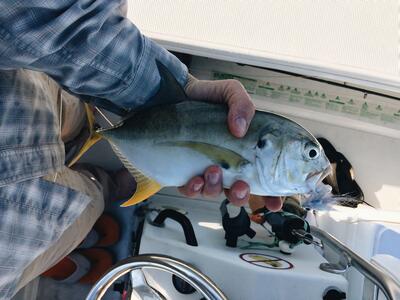 Burning Both Ends of the Florida Candle

Trip Reports - Stories|Burning Both Ends of the Florida Candle

For Florida, we had three goals: Get shots at Tarpon, even though it was early in the season, catch any saltwater fish DIY, and catch something on one of our own flies. 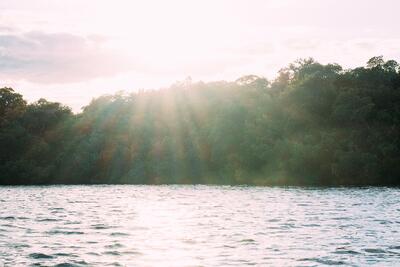 For weeks on end before the trip, my good friend and fellow Duranglers coworker and I had been scouring Google maps for access points to good wade fishing. Florida is not known as a beacon of public land, and water access to any kind of fishable water can be difficult for those without seaworthy vessel. However, we had found a few spots close to our hotel that could fall into the “grey area” of legal accessibility.

This was our first night in town. We slammed hotel coffee as we charged out the door at midnight, rods rigged. 5 minutes later we were creeping neighborhoods, peeking over bridges, and blasting casts off of unknown docks into the blackness of the salty night. Nothing hooked, nothing landed. Lots of fish spotted in the glow of the infamous Florida “dock lights” though…and just out of casting range by a measly 50 yards. A quick primer on dock lights: these green lights attract microscopic zooplankton, the zooplankton attract small bait fish, and small baitfish attract bigger fish. A DIY food chain. We were already pushing the legality of our fishing spots…we chose not to push it further into private back yards. Dejected and fishless, we called it a night. 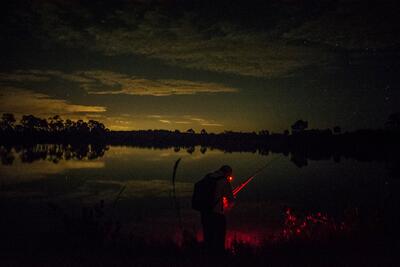 We launched with our guide and friend, Captain Jamie Allen. An ex-resident of Durango, Colorado, Jamie relocated to Florida to become a Florida flats guide. People have made worse decisions. Our morning program was simple: tarpon hunt. We tried to keep our hopes in check, it was early in the season after all. Twenty minutes in, and I was casting to a monster laid up adult. A decent cast…and the poon lazily disappeared to the depths.

Not a refusal, not really a follow. Not really anything.

The morning was slow and only a few shots were had, with no fish fed; but we were ecstatic! Our first goal was accomplished! Shots at tarpon in March! Anything else (as it always is in tarpon fishing) is proverbial icing on the proverbial cake of heart wrenching chaos. The afternoon was finished out with a session of backcountry baby snook smashing that managed to bring out the “6-year-old with-cane-pole-and-can-of-worms-at-a-bluegill-pond” in both of us.

The versatility of the 10wt PREDATOR makes it the go to rod for flats fishing in Southern Florida, from gently landing diving crabs to tailing permit to taming the flats king. This may not be the one rod to rule them all but it's pretty close.

Our evening plan was a simple one: go fishing in an abandoned sub development with a lake and canals created by a lock system. Also don’t die by alligators. These canals hold a strange litany of brackish water critters such as tarpon, bass, snook, and carp. No trespassing signs disregarded, we found ourselves deep within the nightmare of mainland Florida mosquito hell. We made hundreds of casts into the blackness as explosions of fish sound off, once again, just out of reach. With every step I anticipate a gator landmine to rip my legs off. Glistening and skittering spider eyes in the beam of my headlamp had me hating myself for wearing flip flops. Again, we leave fishless and dejected. This seems to be the constant tone of our midnight departures. 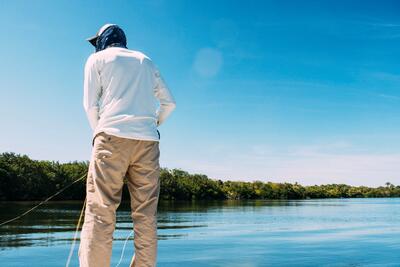 Rise, coffee, make a run, hunt for silver kinds. I could do this every day. Once again, not a lot of tarpon out…but a few were rolling and swimming. The “feed em” situation hadn’t changed much though. I blame it on the water temps and not on my complete ineptitude as a saltwater angler… The afternoon is wiled away much as the previous with backcountry snook. Days on a flats boat go way too fast. After dinner, our night fishing remained in question so we decided to stop at the only place open after 9 on the Gulf Coast: Wal Mart. Without a craft in Florida, fly fishing is “playing on the hardest level” and we decide to pick up a shark rig for a beach mission. Then we see her. A shapely beauty, decked out super tactical black ops camo: the Seahawk 2 person raft. Complete with oars, pump, safety chamber, and certification (whatever that means). A craft! A vessel! Only $44.95. 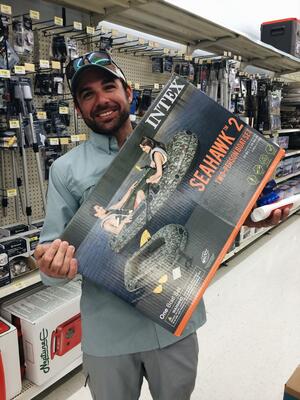 It took us all of 8 seconds to make this decision.

As crusty fly shop dudes, after two days and two nights of tough fishing with little sleep, it is possible that we could make decisions that might be considered “unwise”. Decisions such as taking a craft suited for swimming pool and putting it into the ocean. We were sick of the picky fish. We were sick of the refusals. Skate or die man. Back to the hotel! Rig rods, assemble boat, disregard safety, and drop in over a local barnacle encrusted seawall. To our surprise, the craft held. Off to the first dock light. 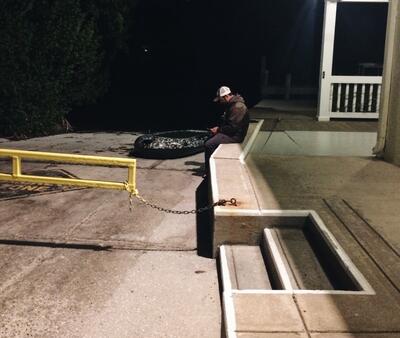 Now we had no real point of reference for this type of fly fishing, and we expected minimal success. I was up first while Rob kept us in position with the GI Joe oar. Doing my best to not flip the Seahawk, I writhed into a puckered position and eked out a miserable cast, far short of the target… it didn’t matter, my first strip and I had 3 followers. No committers, but enough to get my heart racing. My second cast and I had one on. A respectable snook in the length of teens. Not slot, but whatever; goal’s 2 and 3 accomplished: DIY saltwater fish on our own flies. 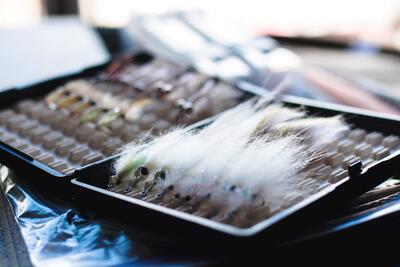 For trout dorks from Colorado, this is a big deal.

On the edge of visible light, possibly on the edge of our sanity, she sat motionless. A snook, longer than our boat is wide, watched as the juvies dart in and out of the green glow with an adolescent stupidness. She knew this game, and she played her cards well. The fly landed and instantly 5 pre-pubescent linesiders were on it. Rob can’t strip fast enough to keep it out of snapping jaws and make another cast. The track star of the bunch eats turns, runs, and breaks our 25 pound shock, pulling the boat too close. The entire light goes up in an explosion of kicking tails and boiling water. When the wake subsides, she is gone. If one finds themselves fishing in the vampire hours of the night, drifting in a “certified” inflatable craft from Wally World, hopped up on more coffee than they would like to admit; big snook become terrors of the mind.

The BEHEMOTH offers the performance of a premier skiff at the price of a Wally World raft, keeping your DIY trip within budget.

The wind kicked up and was ripping. Temps had dropped and the tarpon flats were not an option. Backcountry snook and redfish were the target. With the temp change, the snook are wary and thanks to a high dollar redfish tournament; the reds were freaked the eff out. They spooked at even a blink of our eyes. Fishing was tough and we were ready for what night held. Back onto the ninja boat of power, we paddled our asses off into the wind to reach a new canal. Earlier recon produced a multitude of new green glows to attack. We planned an all-nighter. 8 visible lights in the first canal alone, we were ready.

With an incoming tide, and incoming bait

We make it to the first light and it is swarming with fish. Bigger average snook than the previous night too. I begin to strip line off, but I don’t even cast. Something has already taken the fly and is diving straight down. I make quick work of the shefish, unhook it at the boat and throw out an adrenaline laced cast, still taking care to fish the edges towards the center. Instantly 20 fish are on my fly. We have never seen anything like this. We decide to catch 3 fish, then switch rod/paddle duties. My 3 are up in 3 casts 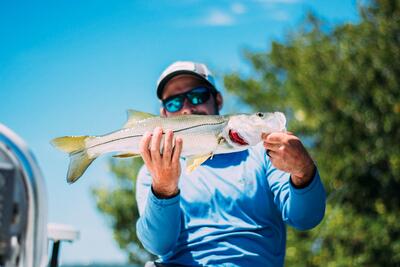 The next hour goes by in a blur and flurry of fighting wind and jumping snook. We lose count, it doesn’t matter. This could be the most epic saltwater fishing we have ever seen, but as all good things go…Pop! Hissssssss! I can’t help paddle back because I have to keep my finger on the hole. Rob is pushing hard to make it back ASAP.

We dreaded floundering in a channel, our shark courage was not that strong

This is the end of the line, but our hope lasts longer than our acceptance of the truth. We scour the hotel for patch kits, tape, anything, but it’s done. Our most unreal saltwater fishing cut short. For a few brief moment, we were kings, doing it our way in a Seahawk 2. Before our eyes, our trusty craft fades to a shadow of former glories. 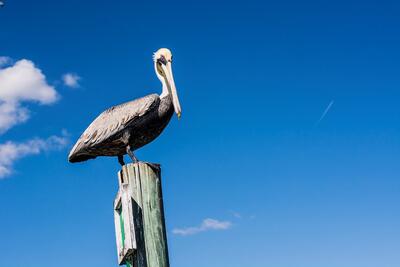 Much like the previous day, it is windy Snook are out, and we manage a few. Rob boats a stud, and I catch a sennet. I am convinced it is just a baby barracuda. The wind and the cooler temps have made the second two days on the flats tough. With the fishing over, our gear packed for the flight home the following day, we decide on one last Hail Mary. At 11:30 at night, with all the “people of” in full effect, we made the journey back to Wal Mart.

We lay our friend and companion, the Seahawk 2, to rest where she started…after a refund 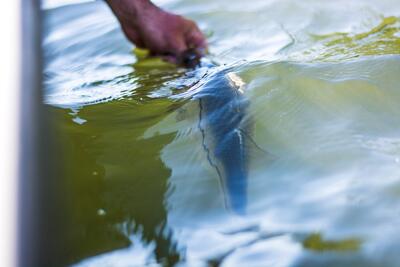