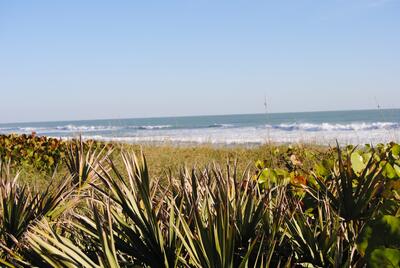 you don’t have to leave a place to miss it

A lot of fishing is being in the right place at the right time. When thirty-two scruffy division three baseball players lifted off from Newark International Airport in one of the angriest wind, snow, and rain storms I have ever seen, I knew I was going to need some luck. When those thirty-two men, significantly more tired and disgruntled, landed safely in Florida all in one piece, I knew I had some.

Scouting for fish through the dunes.

The annual spring training trip for my university’s baseball team always delivered me through the winter. Cold, early morning practices in New Jersey are always overshadowed by the prospect of fishing the surf and the surrounding water. After paying a visit to the good folks at Tight Lines in Parsippany, I tied up several dishes for the species patrolling Florida’s surf. The clippings of clousers, gurglers, and small, white baitfish patterns littered my desk, but I was ready.

My first catch of the trip, a jack that was fooled on a hand tied gurgler. Photo by Cory Nusbaum

The first morning in Florida, I woke up early with some teammates to scope out the beach, a fifteen minute walk from where we laid our heads the night before. I surveyed the beach, looking for signs of fish, only to give up shortly after and blindly cast into the surf. After peppering the beach with a steady serving of chartreuse clouser minnow presentations, I felt something tickle the end of the line. I set the hook, but just as quickly as the fish took my fly, he somehow avoided capture. I swore. My roommates finally started paying attention. As soon as I felt the fish slide off the hook, I sent a cast to the same spot, receiving a heavier, more aggressive strike, giving me the false hope of landing him after a ten second fight, eventually breaking off the fly. I ran back to where my things were stashed on the beach and tied on another fly, babbling to my roommates about almost catching something. They quickly pointed out the school of dolphin jumping shockingly close to shore. I saw several schools of jack crevalle riding the waves like surfers, coming closer and closer in formation like an army. I tied on a white gurgler and ran to the surf, my roommates shouting casting directions from the dunes as the schools approached. I slapped a cast right above the school when my friends said the word, the fish busting the surface of the water in synchronization. I stripped the gurgler three times before I saw the mouth of a jack snatch the fly from the top of the water. My roommates cheered when they saw the bend in the rod and the drag screaming into the backing. After fighting the fish for quite some time, he rolled to my feet, both of us exhausted from the fight. High fives, pictures, and smiles ensued. Florida was off to a hot start.

A few hours later, my teammates and I pulled out of the hotel parking lot in our bus to the first game of the trip. On the way to the game, we drove past countless ponds on golf courses. This sparked my interest, and I planned on rigging my 8 weight Path after soaking myself in the hot tub at our hotel. The ocean had rougher waves that morning, so I didn’t feel bad leaving it alone to chase snook in the ponds. Although it took several days, I finally connected with a meaty snook hiding in the corner of one of the ponds. After flicking a baitfish pattern that imitated an injured fish for days, the white fly disappeared in the dark pond, and with a strip set, the shadowy pond came to life. The snook thrashed and flailed, but could not escape the hook set. He was released to live another day, hopefully gaining a little knowledge on avoiding arrant chip shots from the golfers, and long casts from fly fishermen.

One of the snook fooled this trip.

The night before we left for New Jersey, my teammates and I sat by the hot tub, searing our fresh sunburns, recalling the week’s great moments. Fish stories, arguments with umpires, wins, losses, and bullpen antics were discussed after crushing Florida’s poor excuse for pizza. We recognized that we weren’t ready to go back to the fifteen inches of snow that coated the ground of our campus in our absence. After going 6-2 and having luck on the water, we realized that sometimes, you don’t have to leave a place to miss it. In this instance, we missed south Florida’s charm before even boarding our flight back to Newark. Hours later, the snow greeted us boldly, as did better tasting pizza, and indoor baseball practices.