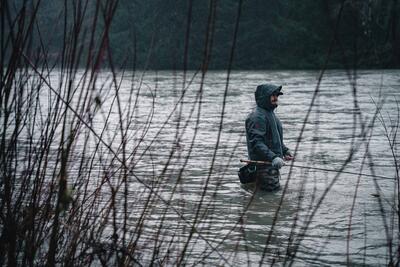 This winter has been one wild ride. It started with heavy amounts of rainfall, causing the rivers in the Pacific North West to reach flood stages, making them impossible to fish. Then, the season came to an abrupt end, as the state of Washington shut down all fishing in response to COVID-19. In between the start and finish of the season, anglers were able to spend time with fellow anglers, laughing at old stories, talking about their hopes of catching a fish, and even sharing in the rare moment of hooking into a fish.

The view from the rower's seat.

To some, the kick-off to winter steelhead season is celebrated New Year's Eve and carries on into New Year's Day. Most anglers would trade lavish parties and champagne toasts for a night spent around a campfire, passing a bottle of whiskey, sharing fishing stories of the past, and dreams of what the season to come could be. This past New Year's Eve was filled with friends, stories, laughs, and whiskey, as we all watched the rain comes down. One of our favorite rivers, which typically flows at 5,000 CFS, spiked upwards to 65,000 CFS and the 15-day forecast called for more showers with a short break every few days. Old-growth washed down from high up in the National Park, this past New Year's Eve and the unofficial start of winter steelhead season wasn't a complete wash, as there's something to be said about spending time with those who help make this life more enjoyable.

In route to the next piece of water. Photo by Clay Nowak

As forecasted, the rain continued and the month of January remained unfishable. Just like that, the month was over and anglers lost the first quarter of the season. The forecast for the first week of February showed signs of improvement and the rain began to clear. The rivers started to drop into shape for the first week of fishable conditions and the fish seemed happy. Fishing reports from many anglers were a grab, fishing was good. There is nothing more memorable than hooking and landing your first wild winter fish, but being able to share that moment with someone as they hook and land their first fish is a close second. Despite the limited days on the water this year, I did get to share that moment with a good friend.

The long walk up to the head of the run. Photo by David Reilly

Teaching someone how to Spey cast is fairly easy, but teaching someone how to Spey cast who is already an accomplished fly angler, can be a little more challenging. Experienced anglers tend to get frustrated quickly when learning the basics of the Spey caster's dance. The typical sustained anchor Spey cast has three basic movements; the anchor placement, the sweep, and the forward stroke. Like an orchestrated dance, Spey casting needs to be learned one movement at a time. When fishing heavy flies and sink tips, the cast or the dance starts with a downstream roll cast to help get your setup higher in the water column, making it easier to cast. The next movement is the anchor placement. Regardless of the type of sustained anchor cast you're doing, you have to move in some way or another. Where the anchor is placed will determine if the cast will shoot across the river or land in a pile right in front of the angler. If placed too far from the angler, they'll struggle to get the tip and fly out of the water as they attempt their forward stroke. If the anchor is placed too close, then the angler will risk giving themself a new piercing. The next movement to the Spey caster's dance is the sweep. This movement is where the angler moves the tip of the rod across their body from a low starting point transitioning to stopping it at a high point. A lot can go wrong here. Some of the common mistakes are a bouncing sweep, this happens when the angler lifts and dips their tip during the sweep, causing their head to fall back into the water, resulting in a lack of power on their forward stroke. The other common mistake while sweeping, is going too fast or too slow. Too fast will cause the angler to blow their D-loop and too slow will prevent the D-loop from ever forming. The last part of the dance is the forward stroke. If the angler waits too long for their D-loop to form, the D-loop will collapse causing the rod to lose its load, resulting in no power on the forward stroke. The opposite problem some anglers will have is rushing the forward stroke, causing them to blow their anchor, once again resulting in a loss of power on their forward stroke. The dance can be tricky to learn and master, but what's even harder for accomplished fly anglers to grasp is trusting your cast no matter how bad it may seem. Just how everyone wants to cast the fly to the other bank the first time they pick up a fly rod, the same is true when they pick up a Spey rod for the first time. The thing about casting for winter steelhead is that Spey anglers are fishing the inside water. As long as an angler can get some line out of the rod and make a halfway decent swing in a good run, they have a chance at hooking a fish.

Some anglers lean towards bright flies others prefer darker ones, but its always good to carry both. Photo by David Reilly

Jean with her first wild steelhead on.

Jean holding a nice bright hen which was measured at 32 inches. Photo by David Reilly

Taking a break from skiing at Sun Valley resort, Jean and Dave headed West from Ketchum, Idaho to the Washington coastline for a few days of fishing. Like many first-timers to this area, they were both amazed by the stunning landscape and the fact that it does rain a lot. Jean and Dave are both great anglers and have fished anything and everything from small mountain creeks to saltwater flats, but this was their first time swinging a fly for steelhead. They were both complete novices to the Spey caster's dance and with a quick introduction, it was clear that both of them going to struggle slightly getting the movements down. As many good anglers do, they wanted to quickly go from the first step to hucking as much line as possible. After plenty of "wind" knots and some casts that nearly resulted in a new piercing, both Jean and Dave we able to cast enough line to fish a run with confidence.

Just like any formal dance, appropriate attire should be considered. A12'6" 7 weight Spey rod will handle conditions found on winter coastal rivers. The 12'6" length is long enough to lift tips and flies out of the water but is short enough to be able to cast in tighter conditions. Pair it up with a BEHEMOTH 9/10 reel and you'll have a well-balanced setup that will handle the brightest of fish.

Confidence is everything when swinging flies for steelhead. If an angler doesn't believe in their fly choice, the run they're in, or the cast they've made, (even the bad ones) then hooking a steelhead becomes even more difficult. To both beginner and expert steelhead anglers, confidence can be the toughest obstacle. Jean and Dave were no exception to this. As they began to understand the Spey caster's dance better and their casting improved, they both felt the need to cast further and further. This resulted in them making very few good long casts with many failed attempts in between. Distance became their priority, and both lost focus on making sure their fly swung well during the swing. They were encouraged to make a shorter cast and to make sure their fly swung to the bank. Once they started to believe in their ability as a Spey caster and discovered that making shorter casts allowed them to more efficiently fish a run, their confidence begun to build.

The release. Photo by David Reilly

The second day started like most when steelhead fishing, nice and early. About an hour or so into the run, both Jean and Dave's casting and confidence were feeling right. They kept their casting distance to a range that was easily manageable and fished the fly into the bank. A moment later, Jean did the unthinkable. She managed to find that needle in a haystack and yelled out, "I think, I'm on one". Hearing this exclamation doesn't always mean much, as many anglers overreact when they hook bottom or when a small cutthroat plucked at their fly. This morning proved otherwise. Jean's Spey rod was fully bent and a bright fish came flying out of the water. After a few short runs and a few more aerial acrobatics, Jean was holding her first-ever wild winter steelhead. Being able to witness a special moment in someone's life is almost as unique and rewarding as living that movement. We fished out the remainder of the day with no other action, but everyone was still buzzing from that morning's fish. The smile on Jean's face remained there for the rest of the trip, as did the smiles on ours.

Paul sending out a cast.

The rainfall began to clear up and late February quickly turned into the opposite of January. The few forecasted storms weakened out and the rivers continued to drop below their average flows for that time of year. The lower flows meant anglers started to concentrate on a few sections of the river and the fish had fewer places to hide. Many other rivers failed to meet the minimum forecasted numbers of fish returning and begun to shutdown to anglers, forcing more pressure on the few remaining rivers that stayed open. The once grabby fish had become less willing to take a swung fly and what was once a grab a day, started to feel like a grab every five days.

Navigating through some old growth.

By early March, the season was into its peak and forecasts called for some more rain. The bump in water level was much need for both the fish and for the anglers. By this time, the world was grappling with COVID-19 and many things started to change quickly. The once very familiar world becomes one filled with uncertainty. Many individuals were looking for something to provide a sense of normalcy and anglers' time on the river was just that. That sense of normalcy would also change as WDFW made the call to shut down all fishing as a precautionary measure to help contain COVID-19. Just like that, winter steelhead season ended just how it had started, with anglers watching flow levels and tying flies from the comforts of their own home. An already short winter fishing season was made even shorter beyond controllable forces, but just like New Year's Eve, the Fourth of July brings another type of celebration for steelhead anglers as they mark their calendars for the unofficial start of summer steelhead season.

Steelhead requires early morning starts and a lot of faith in your fly selection. Photo by Clay Nowak